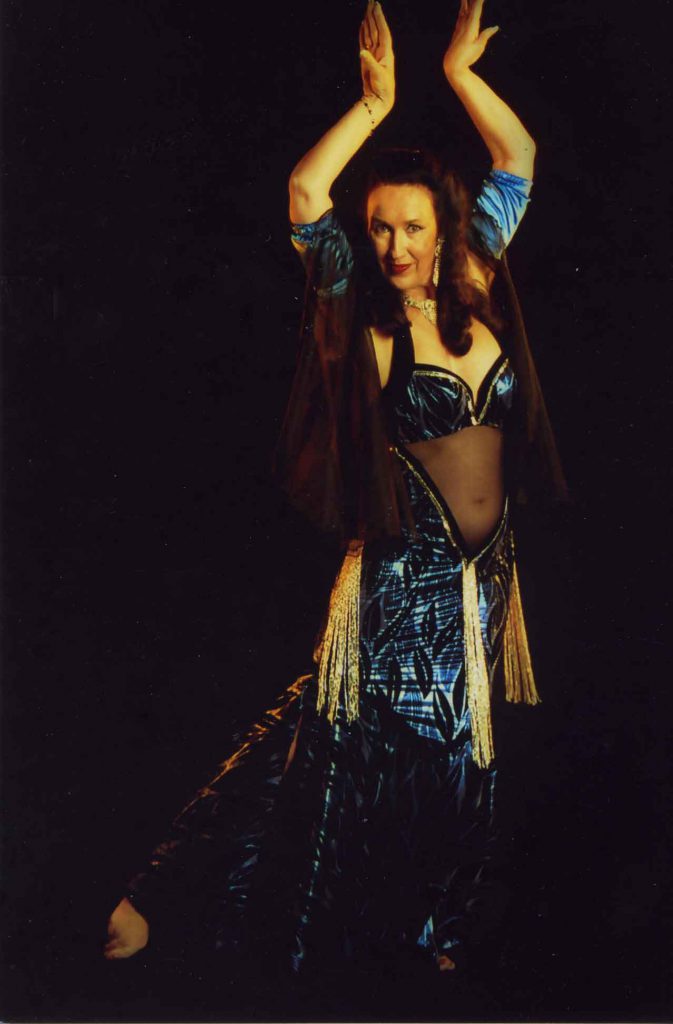 Mardshana Samra has been belly dancing for more than twenty-five years and has been trained by many internationally recognized teachers.

She has particularly been influenced by Lilo von Hugo and Havva (Germany), Sakti and Amaya (USA) as well as Prof. Dr. Hassan Khalil (Egypt). Mardshana Samra has participated in various shows in Germany and America and has danced in Hurghada (Egypt) and Djerba (Tunesia). She is a dance instructor and choreographer and writes for German and English-speaking belly dance, midwives’ and physiotherapists’ magazines.

Mardshana Samra has produced and organized many shows, with partners or alone:

Mardshana Samra’s “Ensemble 1001” is always supporting her. It was founded in 1994, has been faithful to her since then and open for her experiments and new dancers. The cheerful and powerful “female gang” is a solidary, belly-dancing microcosm which has been welded together through all the ups and downs of the various shows and which has always been enthusiastic about the dance.

From the very start Mardshana Samra has been interested in the therapeutic aspects of belly dancing. She has won high international reputation with her research in the field of “Birth Preparation through Belly Dancing”, especially with the production of her DVD “Belly Dancing during Pregnancy”. In 2005 a report on her work in this field could be seen on the channels of Arte and ZDF. Spin-offs of this research work are her projects “After-birth Fitness through Belly Dancing” and “Power from the Center – Pelvic Floor Training for Belly Dancers”. This topic is covered in her most recent book “Die innere Kraft der Frau – Beckenboden und Bauchtanz” (The Woman’s Inner Power – Pelvic Floor and Belly Dancing) which was published in 2007 and is so far only available in German.
Mardshana Samra provides training to dancers, dance teachers, midwives, obstetricians and physiotherapists all over Europe.